Participants of the 2020 Asia Dance Community Choreo-Lab Showcase will present the outcomes of their research, mentoring, and collaborative projects during their residency at the ACC. 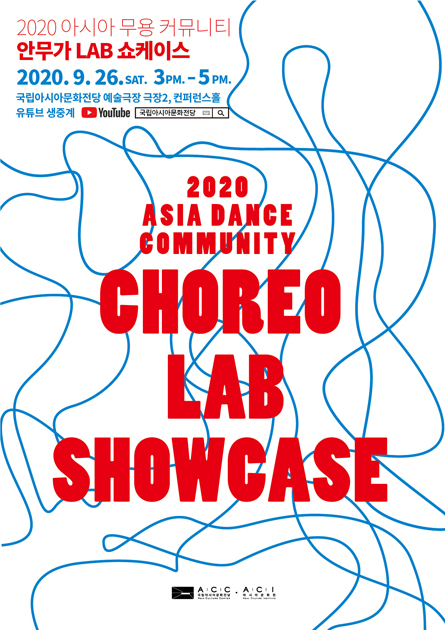 Due to the spread of COVID-19, the 2020 Asia Dance Community Choreo-Lab Showcase will be held as a no-audience event.

Performances at the ACC Theater Conference Hall will be streamed live without an audience.
Live Streaming Schedule
Each choreographer’s showcase runs around 20 minutes. The order of the showcases is subject to change.

Download leaflet +
Launched in 2019, the Asia Dance Community Choreo-Lab is a residency program designed to help choreographers expand their creative foundation by supporting their projects.

In 2020, the ACC selected four choreographers through an international call for applications.
This fall, the artists will showcase the outcomes of their research, mentoring, and collaborative projects during their three-month residency.

As before, I didn't do anything
Relationships, death, and disease. Last year, I had all these things happen to me roughly at the same time. Faced with overwhelming pain, I accepted them without any preparation. Or so I thought. Now, those instances of pain have been produced into emotions, transforming my existence into a scattering of fragments. Relationships, memories, looks, and expressions. All of them fell apart, which I had considered as a part of my everyday life. In fact, from then until now, I did nothing. I did not even try to express the pain, or put it into words. My time had stopped then and there. Now I will set the time in motion. From this point in time, I will rendezvous with the time that had stopped.

These recordings show different tracks of unexpected and overwhelming events that, by accident, took place at similar times, tracks that converge, yet stay separate, and sometimes overlap.
I’m focusing on you
Marcel Duchamp’s “inframince” roughly means fine differences between two objects. I’m focusing on you borrows this concept to talk about an invisible boundary, or a form of consciousness. It focuses on the “consciousness of ceremony,” the “act of focusing, paying extraordinary attention,” and the “will to communicate, pray.” It freely performs a ritualistic travel between the heard and the unheard, the known and the unknown, and the real and the unreal. Through that journey, by paying attention to those infinitesimal changes, this piece shows that boundaries exist not to separate a world from another, but to connect the two.
I might be wrong
Assuming that the transition from the act of “seeing” to (conscious or unconscious) recognition takes place through a multitude of choices, which of those choices are individually or collectively different? How are they different? And why? These are the questions that motivated this dance. I was able to narrow my questions through a preliminary online survey. I asked people about a wide range of things they see, hear, know, and take, and focused on where their answers naturally converge. Interestingly, those converging answers met with my theme of ten years, “the seen and the unseen,” which has led me to taking a choreographic approach where the order of “theme-choreography” is reversed. I objectify my own body and movements, and then search for themes based on the shared view of these objects.
I feel like I'm ready
Women depicted in the folk paintings of Shin Yunbok, a famous Korean painter in the late Joseon period, are the main characters and the heroines of romance. Shin did not try to hide anything as he painted their natural and pure expressions of desire. Despite the changes in social structure and perception, expressions about women’s desires imagined as a “paradise and fantasy” are only found in old paintings, and constitute a striking contrast against the suppression and restriction of women’s desire in the vertical order of the present day. This piece approaches the conflict and gap between the two by taking a choreographic approach that utilizes “women’s games” as a mass cultural code, and approaching the expression of women’s desires and the actual images. Park Jinyoung is currently working on choreographic and video projects in Korea and Europe, along with exhibitions and performances.
Her 2020 projects include:
Nomadic Life, an online exhibition for artists selected for Straight Through the Wall 2020 (June);
A Trail to Disappear, an exhibition on the wall of a public building in New York (October);
the screening of (and) about time (too) in Brussels, which had selected for the 2020 International Dance Film Festival Brussels (October); and
the 2020 Asia Dance Community Choreo-Lab Showcase at the ACC in September.
Wee Bora Wee Bora graduated from the Department of Dance Performance at the Korea National University of Arts School of Dance. She won a Gold Prize in the contemporary dance category at the Donga Dance Competition, and ranked 2nd at the Seoul International Competition. In 2005 she starred as a guest dancer in Shall we talk about it by Dorkyh Park, a dance company led by the choreographer Contanza Macras. In Korea, as a member of the Laboratory Dance Project (LDP), she appeared in and choreographed various projects including Sinawi, Journeyi, In other words, White Night, and The Wings.
In 2012, after collaborating the French choreographer Pierre Rigal in Théâtre des Opérations in Europe, she danced in JOB, Chronique Diplomatique, and Les Royaumes as a member of the French dance company Adéquate (Lucie Augeais and David Gernez), and appeared in choreographer Jérome Bel’s Gala and Pierre Rigal’s Merveille. In 2020, she was invited to Staatstheater Mainz as an assistant choreographer for Welcome Everybody.
She founded Compagnie R.A in France, and ensured the successful completion of two Art Council Korea programs in 2019 and 2020: the Young Artist Network Program and the Overseas Residence Invitation Program. In 2020, she was also selected for the Culture and Art Exchange Program at the Gwangju Cultural Foundation. Traveling between Korea and France, Wee continues to build on her prolific career as a choreographer and dancer.
Kim Esl 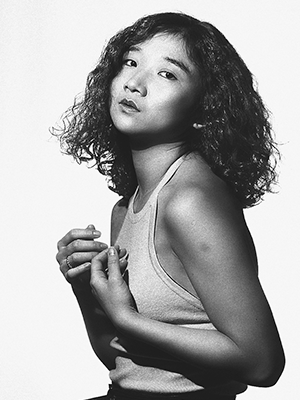 As a performing artist, Kim Esl’s research focuses on spaces, relationships, languages, and bodies. As her major theme, she explores the seen and the unseen, and each of her works focuses on a specific sub-theme related to it. As a researcher who values experience, she works and performs in numerous venues and cities.
She showcased her choreographic works at the Next Generation at the ARKO Creative Academy, the Korea National Contemporary Dance Company Choreo Lab, the Saengsaeng Festival, the PADAF Festival, the Ansan Street Arts Festival, and the Debut Contest. She has also worked on various place-specific projects and actively collaborated with other organizations and artists.
She also appeared as a dancer in a wide range of choreographic works in Korea, the United States, Canada, Austria, Brazil, France, Germany, and Mexico.
Lee Jungin Lee Jungin is an independent artist whose artistic activities encompass various disciplines with focus on contemporary dance. She has been traveling back and forth between Korea and Europe since 2010 to work in dance companies and other diverse projects in Berlin, Budapest, and Sofia, the capital of Bulgaria. In 2014, she became a member of the Korea National Theater of Contemporary Dance, where she worked for two years.
Starting in 2016, she served as a collaborative choreographer for Redsapata-TanzFabrik, based in Linz, Austria, and as a visiting choreographer for the Black Box Dance Company in Denmark, along with other choreographic projects, workshops, and international collaboration programs.
She currently works with the global convergent group DARV for a project that brings technology and art together. As a choreographer and a creator, Lee is an active presence on whichever platform she works on.