Asia Culture Center opens this exclusive exhibition in commemoration of the 39th anniversary of the Gwangju Democratic Movement on May 18, also known internationally as Gwangju Uprising (광주 항쟁), May 18 Gwangju Democratization Movement (5.18 광주 민주화 운동), and May 18 Democratic Uprising, by UNESCO. This was due to the fact that from the 18th and during the following 10 days of May in 1980 the city was besieged and attacked by the army and paramilitary troops, in order to repress the pro-democracy popular movements of that time.

This artistic representation of the ten-day struggle is divided into 4 fundamental stages: introduction, development, turn of events and conclusion, for a better understanding of each of the events that occurred.

On the first floor there are three important sections: "Welcome to Gwangju", represents the historic pressure that  Gwangju citizens overcame to make way for a joining stage. That is why this section shows a great structure that crosses the three floors of the exhibition with pictures of several people from different nationalities smiling sympathetically with the spirit of May and the future peace of humanity. ¨Sealed Time 1979-1980¨, this section reopens sealed thoughts of the  May 18 Democratic Uprising through illusion thoughts that the visitor can experience.

The visitor has to appreciate the image of a human being on the wall on the right side,  who responding to the visitor´s movements and creating waves of light, then these waves are broken and dispersed, this is in order to provide the feeling that the visitor is strolling through clouds so that the visitor finally opens his thoughts and begins the spatial journey through the historical fragments of the uprising that are located on the monitors that the floor contains. Gwangju "The station of Light" represents the space where Gwangju citizens gathered on May 16, 1980, two days before the main the event occurred on May 18 around the fountain of the Provincial Office to claim democracy. The bronze figures in this section represent the citizens who are also located in different places in the exhibition. 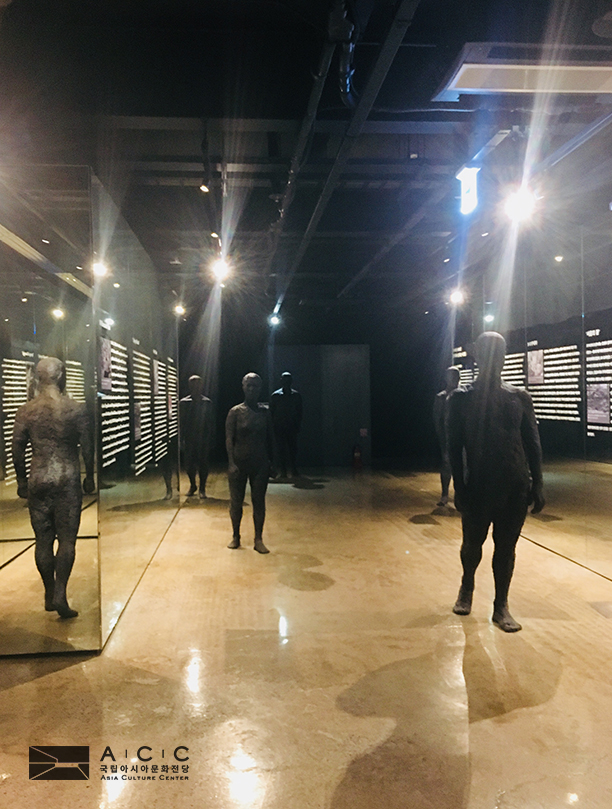 On the second floor there are three other sections that continue with the representation of the events that occurred. In the section "Timeline Gwangju, May 18-27" there are monitors installed on the wall on both sides that contain stories related to the violence that occurred in Gwangju during those ten days. The stories were made based on the testimonies by the same citizens who personally experienced the uprising, each of these stories are shown with just entering the scene touching the title of the story in each of the monitors. 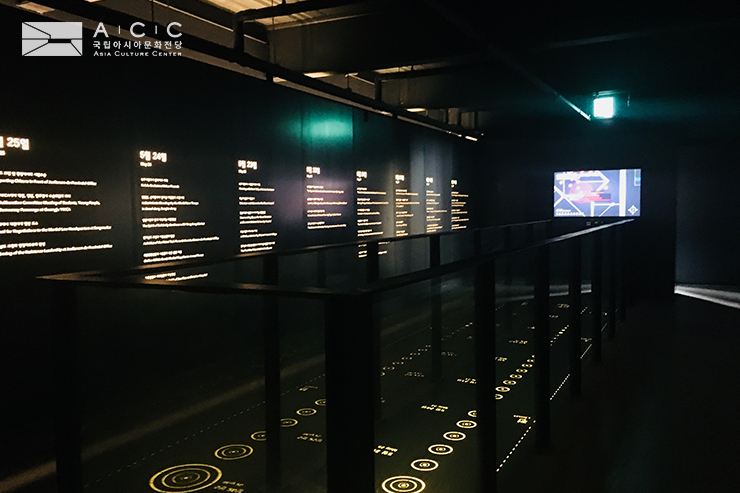 In the next section "The Sunday cries, May 18" there is a large loudspeaker in the middle that represents the overwhelming words and violence that citizens suffered on the morning of Sunday May 18.

While in the section "Heroes of Evening on Tuesday, May, 20" shows the vehicle scene in Geumnamro, an area where the drivers who witnessed as the war brigade drove more than 200 buses and trucks with headlights on and sounding the voicings as a sign of support until Provincial Office of the city. In this space, the visitor can simulate passing through the gap between the tumult provoked by the military and police,  and how from the buses that are on both sides of this section come the sounds of the horns and shouts of the people who responded to the movement. Finally, on the third floor, it is located "National Anthem of 1:00 pm, May 21", in this section the group of translucent figures represent the Gwangju citizens who begin to participate in the struggle on their own, that is why after a special war with the brigade near the Provincial Office, many of them die by distraction taken by the brigade in putting the national anthem in high volume while they were in full confrontation.

This great exhibition full of history and an impressive infrastructure, lights and technology in its interior it is located at the ACC Culture Exchange, the entrance is completely free and can be visited until Sunday, August 18.